Appetizer or Side Dish 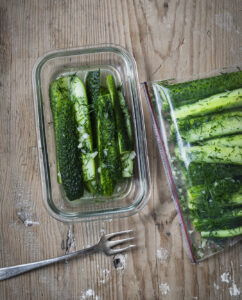 These pickles couldn’t be simpler. The recipe comes from Katya Bruyaka in Murmansk, whose small kitchen is a wonderland of homemade distillations and preserves that allow her to throw together fabulous meals on the spur of the moment. When Katya served me these pickles, I worried that she might be using up the last of her precious summer preserves before winter had come to an end. But she just laughed and happily shared her secret with me. Now I make these pickles whenever I crave a quick Russian fix.

Place all the ingredients in a small ziploc sandwich bag and gently massage to distribute the seasonings evenly. Leave the bag on the counter for 20 minutes, turning it occasionally to bathe the cucumbers in the liquid that forms. The pickles will be ready after 20 minutes. They will hold well in the refrigerator for a couple of days.

Recipe from Beyond The North Wind.

Rather than succumb to the doldrums of winter, I try to be Nordic and embrace the bitter cold and the dark. And that sometimes means playing with fire!

We have a wood-fired oven in our kitchen, where we bake bread and pizza and like to roast meat and vegetables near the coals. Recently we began looking for culinary ways to use some of the ash, and this New Nordic technique for coating root vegetables has become a favorite.

When you smear celery root with a paste of salt and ash, the interior turns out wonderfully creamy and perfectly seasoned. Lacking a wood-fired oven, you can use ash from a regular fireplace or from a grill, as long as it comes from hardwood. 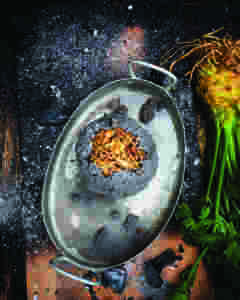 There’s no typo here! This ruby beet tartare is a vegetarian take on the classic råbiff introduced to Sweden from France in the nineteenth century. Like many salads, it’s most dazzling in summer, when beets are sweet and garden fresh. Winter beets will yield a darker garnet dish, not quite so brilliant, and you may want to add a little sugar to perk it up. Spread these beets on bread or crackers, plate them with cured fish or meat, or scoop them onto a bed of lettuce. The flavor is beautiful at any time of year. 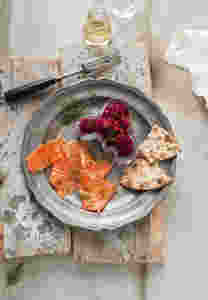 Now an international favorite, blini are one of the oldest Slavic foods, dating back to the heathen tribes that worshipped the sun and created pancakes in its image. These earliest pancakes were called mliny, from the verb molot’ (“to grind”), and the word is still preserved in the Ukrainian, Serbian and Croatian tongues. Light and porous, blini are designed to soak up lots of butter.

Traditionally, one is expected to gorge on blini. Literary and actual precedents are numerous in Russian life: Gogol’s Chichikov of Dead Souls finishes off nine of the pancakes while visiting the widow Korobochka, dipping them repeatedly in melted butter and gobbling them down three at a time, while the downfall of the nineteenth–century gourmand Lyapin was in the two dozen blini he once consumed before dinner.

To ensure perfect blini, Russian cooks use a special pan. Once seasoned, this pan is never washed, just wiped out with salt. The old-fashioned blini pan was clever indeed: four to six small indented pans were joined by a long central body with a handle, so that mounds of blini could be turned out very quickly. But a good cast-iron frying pan will work just as well. Simply be sure to add more butter to the pan after each blin so that the next one won’t stick. (Russian cooks use an onion half or a raw potato or a stale crust of bread to daub on the butter.)

If, however, the first blin you make turns out badly, don’t despair. The Russians have a saying for this (as for every) eventuality: “Pervyi blin komom” — “The first blin’s a lump.” In other words, if at first you don’t succeed, try, try again. I myself like to consider this first blin the cook’s prerogative and pop it right into my mouth.

Recipe from: A Taste of Russia 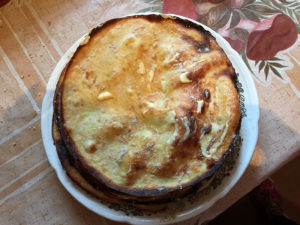 Dissolve the yeast in ¼ cup of the milk, heated to lukewarm. Then stir in the sugar and 1¼ cups more of the milk. Add the buckwheat flour and stir briskly to mix. There should not be any lumps. Cover the sponge mixture and let rise in a warm place for 1 hour.

Melt the butter and mix it with the egg yolks and the sour cream. Add this mixture to the sponge, along with the remaining ½ cup of milk, the salt, and the all-purpose flour. Cover the bowl and let rise in a warm place for 2 hours. (Make sure you have beaten the flour in well; there should not be any lumps.)

Beat the cream until stiff. Beat the egg whites until stiff but not dry and fold them into the cream. Fold this mixture into the batter. Then let the batter rest for 30 minutes more (if the batter seems too thick at this point, a little warmed milk may be carefully added).

Heat one or several cast-iron pans. Brush with butter (and a little vegetable oil, if desired); when the butter is hot, the pans are ready.

Use 2 tablespoons of the batter for each blin, taking it from the top of the batter each time so that the rest doesn’t fall. Pour it onto the prepared pan and swirl the pan to make a pancake about 5 inches in diameter.

Cook the blin for just a few minutes, until bubbles appear on the surface, then turn and cook the other side until faintly browned. The blini are best served hot from the pan, but if they must be held, pile them in a deep dish, brushing each one with butter, and cover the top of the dish with a linen towel.

Of all the biscuits we made in Baking Boot Camp, these were my favorite. They literally melt in your mouth. If you don’t want to take the time to cut out individual biscuits, you can quickly cut the dough into triangles, like scones. 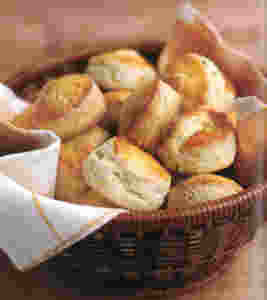 Preheat the oven to 425ºF. In a medium bowl combine the bread flour, all-purpose flour, sugar, baking powder, baking soda, and salt. With a pastry blender, fork, or two knives, cut the butter into the flour until the mixture is the consistency of coarse cornmeal; set aside.

In a small bowl, combine the cheese, milk, 1 egg, and jalapeño. Add this cheese mixture to the flour mixture and stir just until the dough starts to pull away from the sides of the bowl. Do not overmix.

Scrape the dough from the bowl onto a lightly floured surface and knead lightly 8 to 12 times, gently pressing the dough together as you knead. Roll out or use your fingertips to press down the dough to a 1-inch thickness; using a 2-inch round cutter, cut the dough into biscuits. Gather scraps together, re-roll, and cut additional biscuits.

Place the biscuits on an un-greased baking sheet approximately 1 inch apart and lightly brush the tops with the egg wash. Bake until golden brown, 12 to 15 minutes.