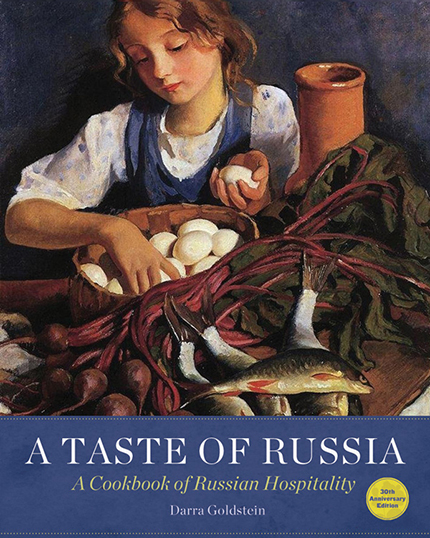 With its mix of classical and contemporary recipes and mouthwatering excerpts from the works of Russia’s great writers, A Taste of Russia offers readers an intimate look at Russian culture and cuisine. Darra Goldstein is equally at home with grand dishes from the aristocracy’s haute cuisine and the peasantry’s heartwarming soups and pies. Now in a 30th anniversary edition, A Taste of Russia remains definitive, layering superbly researched recipes with informative essays on each dish’s rich historical and cultural contexts.

Praise for A Taste of Russia

“This is a book that re-creates the wonderful dishes of the pre-revolutionary Russian nobility, of the hunting lodges, of the boyars, of the simple peasants—from Caucasian skewered lamb to fresh salmon caviar that you can make yourself. A wonderful panorama of Russian hospitality as it was, as it is, and as it still can be.”

“Goldstein…manages to make Russian cuisine dance. It’s hard to imagine anything that might have been left out of this delightfully comprehensive collection.”