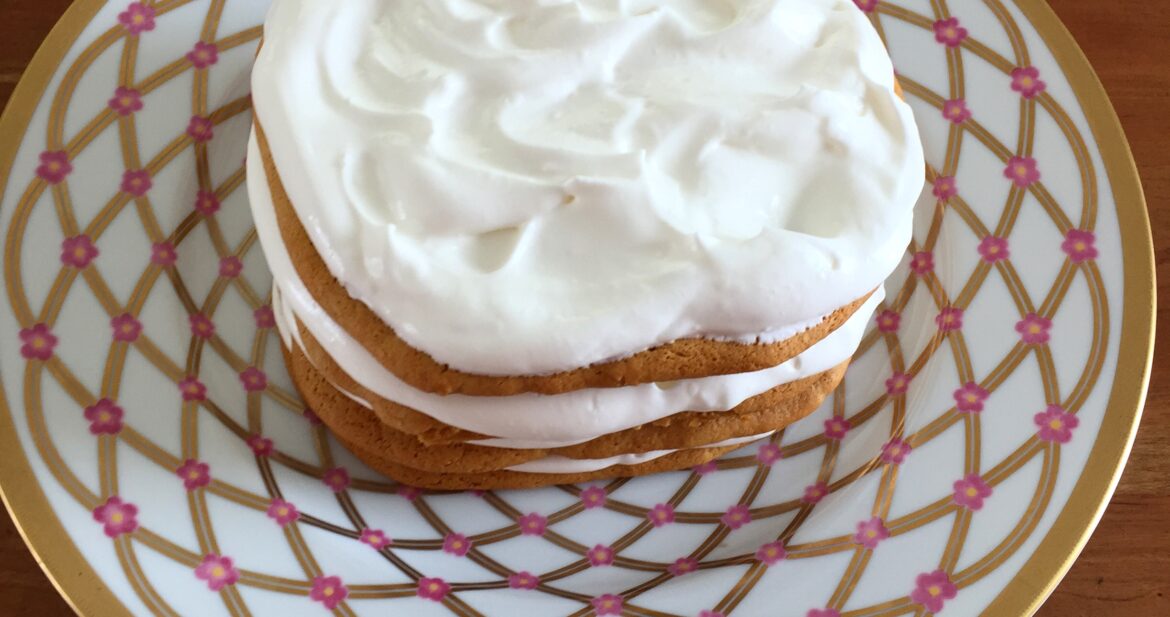 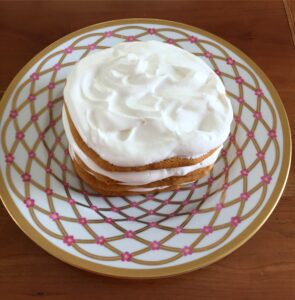 Sour cream and honey, two of Russia’s most iconic foods, are lusciously paired in this honey cake, with billows of sour cream complementing the cake’s chewy texture. The recipe is courtesy of Svetlana Kozeiko, the brilliantly inventive chef of Murmansk’s restaurant Tsarskaya Okhota (The Royal Hunt). This cake is ideal for entertaining, since it has to be chilled before slicing. I usually make it the morning of a dinner party and refrigerate it all day. The longer you hold the cake, the softer it becomes, so leftovers make an indulgent breakfast. To whip the frosting into luxuriant clouds you’ll need to seek out high-fat sour cream (see Sources).

Recipe from Beyond The North Wind.

In a small saucepan heat the butter and honey over low heat until the butter melts. Stir in the baking soda. The mixture will almost immediately bubble up, foam, and turn light in color. Don’t be alarmed by the smell of sodium bicarbonate that’s released—you won’t taste it. Remove the pan from the heat and leave the mixture to cool for about 15 minutes.

Meanwhile, crack the egg into a medium bowl and whisk it by hand with the sugar for a few minutes, until light. Stir in the cooled butter mixture, then sift the flour directly into the bowl, stirring to make a very soft dough. Cover the bowl with plastic wrap and leave to rest for 20 minutes. The dough will firm up and become nicely pliable.

While the dough is resting, prepare the sour cream filling. Beat the sour cream and confectioners’ sugar in a heavy-duty mixer on high speed for 5 minutes, until stiff peaks form. Place in the refrigerator to chill, preferably for 1 hour.

When the dough has finished resting, preheat the oven to 350ºF. Line a 12” x 17” baking sheet with parchment paper. Divide the dough into 4 pieces (each will weigh just under 4 ounces). Rinse your hands quickly with cold water and pat each piece out on the parchment into 5 ”x 5” squares about 1/8-inch thick. Bake the squares at 350ºF for 8 to 10 minutes, until slightly puffed and golden. Place the baking pan on a rack to cool. If you don’t plan to assemble the cake right away, store the cooled squares airtight so they don’t dry out.

When you’re ready to assemble the cake, place one cake square on a serving plate and spread it with one-quarter of the sour cream. Top with another cake square, and continue to layer the cake and sour cream, ending with sour cream on top. Make decorative swirls with the sour cream but don’t frost the sides of the cake.

Carefully transfer the cake to the refrigerator. If the sour cream is still soft and the layers should slide a bit as you move the cake, simply nudge them upright again. Chill the cake in the refrigerator for at least 4 hours to firm up before slicing.