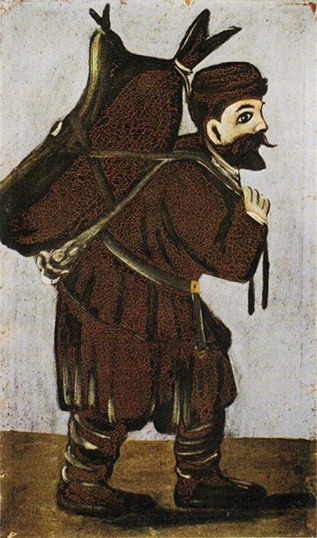 The Republic of Georgia, that is. The Beatles may have claimed that “Georgia’s always on my my-my-my-my-my-my mind,” but I can truthfully say that Georgia really is on my mind these days as I prepare a 25th Anniversary edition of my cookbook The Georgian Feast... Happily, now you can sample over two-dozen Georgian varietals at Freek’s Mill in Brooklyn, or browse bottles online at Potomac Wines (Orgo winery is a particular favorite). If you’re lucky enough to live in New York City, DC, or Philadelphia, you can visit restaurants like Oda House, Supra, and Georgian Bread. But one thing we still can’t savor in the States is Georgia’s marvelous cheese.

Cheesemaking is an ancient art in Georgia, dating back to the 7th century BC. Cheese itself is considered so essential to a good life that it features in the expression Khveli da puri da ketili guli: “Cheese, bread, and a kind heart.” During the long years of Soviet rule, only four standardized cheeses were produced, and Georgia’s rich variety of cheeses was in danger of being lost. But several years ago Ana Mikadze, a philologist turned cheesemaker, almost singlehandedly began to revive Georgia’s artisanal traditions. She sells cheeses from small producers throughout Georgia at her shop, The Cheese Corner, which now has two locations in the capital city of Tbilisi.

One of my favorite Georgian cheeses is Tushuri, a pungent sheep’s milk cheese made in the province of Tusheti, high in the Caucasus Mountains. Some years ago, in mid-January, I set out on a pilgrimage with my friend Zaliko to see firsthand how it was made. We were driving on winding roads along precipitous cliffs when a snowstorm suddenly arose and the pavement disappeared from view. Determined not to give in to terror, I reminded myself of Jason’s quest for the Golden Fleece. Wasn’t I on also on an odyssey, and therefore bound to encounter obstacles along the way? That thought wasn’t a smart one. Jason may have won the fleece, but the vengeance exacted on him was terrible. I decided I’d better focus on the cheese and try not to think about the journey.

I knew that the milk’s special flavor came from the wild herbs of the alpine pastures where the sheep graze. But the real secret to Tushuri comes from its method of aging. The distinctive mottled texture and sharp, briny taste arise from the guda, the sheepskin in which the cheese is aged. To make a guda, the sheep’s wool is sheared close to the skin, leaving it less than half an inch long. After the sheep is slaughtered, its skin is removed in one piece, then washed and dried in the sun. The neck and three of the leg openings are tied shut with hemp, and the skin is turned inside out so that the wool lines the inside. Next, five or six large canvas bags of freshly made cheese are layered with rock salt inside the skin. The cheesemaker then blows into the remaining leg opening to inflate the guda like a balloon. The last opening is tied shut, and the cheese is left to ripen for three to four weeks.

Alas, Zaliko and I never made it to our destination. The car skidded off the road, though luckily not over a cliff. We had to turn around and inch our way back down the mountain. But my consolation prize turned out to be wonderful: a visit to the small village of Tsodoreti, in the foothills west of Tbilisi, where a cheesemaker named Shala lived. Shala was famous for his Sulguni, the salty cow’s milk cheese that fills Georgia’s sumptuous cheese bread, khachapuri. As soon as we arrived, Shala fetched some fresh milk, still steaming in the January air, and strained it through cheesecloth into a pot. Then his sister-in-law Lamara took over. She stirred rennet into the milk, covered the pot, wrapped it in warm towels and a heavy blanket, and set the bundle down by the stove. Before long the milk had thickened. Lamara stirred the curds with her hands and then left the developing cheese to rest for another 15 minutes. When the cheese was ready, Shala gathered it into a mass, squeezed it free of liquid, and transferred it to a small bowl.

Sulguni is usually salted for longer keeping. Held at room temperature, its flavor intensifies and small holes develop. Sometimes the cheese is smoked over an open fire for a month, for 30 minutes each day, until it turns almost russet in color. But to my mind there’s nothing like freshly made Sulguni that’s still buttery and pliant. As we made our way back to Tbilisi, it was hard not to gobble up all of Shala’s masterpiece. But I needed to make sure enough remained to prepare several of my favorite Georgian dishes that celebrate Sulguni’s beautiful melting properties. That night we enjoyed a feast replete with cheesy grits (elarji) and cornmeal cakes (chvishtari), and cheese kneaded with mint, then simmered in milk (gadazelili khveli).

I still haven’t made it to Tusheti to see how Tushuri is made, but with so many exciting cheeses to sample in Georgia these days, I no longer feel deprived.

For more on my adventures with Georgian cheese, see my story “The Cheese and the Sorceress” in the September 2000 issue of Gourmet.